A Walk in the Park

Each weekend when all my monsters are together I try and make sure we do something memorable. I mean I want my children to remember all the fun learning experiences they had when they get older so super mom here plans only the best things ever. Sadly sometimes those plans turn into HUGE fails....


"We're going to the aquarium to see the new lemurs!" I excitedly told my children Sunday morning. Lots of energetic "yay's" was exactly the response I was looking for. But here's where my mom brain failed..

First thing Sunday morning all four of the monsters were wide awake and running crazy at 6 a.m. I know good and well that when mornings start like that then it's going to be a long day, but I ignored it because I had a great day planned out. Indicator number two comes along and like the fool I am I still ignored it. By 8 a.m. all four children were screaming and fighting with one another over EVERYTHING! But again I continued carrying out my plan for the day. Cooked breakfast and of course no one ate hardly anything (another clue that it was going to be a bad day), got the hoodlums all dressed, and then got daddy and myself ready.

So here we are at 11 a.m. in the car and ready for the aquarium, everyone is excited and happy and then the trouble begins. Once we get downtown of course there isn't anywhere to park. We finally found a spot in a parking garage close by. We begin our treck down to the elevator and the kids are starting to get a little rowdy so we quickly get everyone back in line and make it to the aquarium.

No sooner than we made it to the first exhibit did the mass chaos begin...the two oldest started fighting, the little girl needs to be held, and the baby is wanting to run around like a chimpanzee. We tried to remain very calm and move on to the next exhibit. Here the two older boys are now yelling at each other, little girl insists that her feet do not touch the ground, and heaven forbid you blink an eye or the baby will be gone.

Last exhibit comes around and I honestly have no clue what we've seen but I am so ready to get out. Baby is screeching at the top of his lungs, girl is whining because daddy is trying to help with other kids and put her down, boys are mad because they got in trouble, daddy and mommy are both super aggravated. The light at the end of the tunnel finally appears and we see the exit sign. 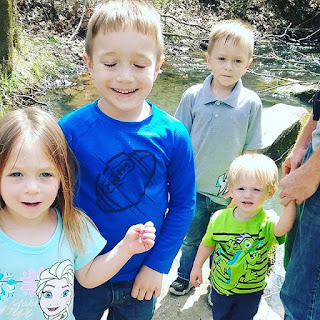 Now rather than punishing the kids for their demonic behavior in public we instead took a deep breath and stopped for a minute. It wasn't their faults they acted like wild monkeys in there. We should have realized they were all ready for a nap from getting up early, they were all hungry from not eating breakfast, and they were overwhelmed by the amount of people in the aquarium.

Needless to say that trip was marked not as a memorable one but as a parent fail. The weekend did not however end on the bad side. We then got lunch and took the kids to enjoy the weather at the park where they behaved WONDERFULLY! We played all afternoon until they were so exhausted they couldn't move. #ParentingWin
at March 28, 2017 1 comment:

As parents there some things we do for our children and wonder why we're doing it the whole time. Like why in the heck am I making myself a nervous, tired, miserable wreck for this?

Most typically it's with birthday parties. Especially for younger kids. We spend hundreds of dollars and hours planning and preparing extravagant parties for our one and two year olds, for what? They are most definitely not going to remember the party. They don't care what the decorations look like, and I can guarantee that they don't care how the cake looks as long as it has sugar in. Speaking of cake; they are just going to take their dirty little fingers and completely destroy that picture perfect cake that you just spent so much time preparing.

Our household is experiencing a similar time-consuming situation lately. We have decided to build a clubhouse for our kids. But not just any clubhouse, the coolest most awesomest clubhouse ever. It's equipped with a rock climbing wall, slide, sandbox, windows, ladders, a platform on the roof for extra play, and of course it'll be painted to perfection. We have put all these hours and dollars of work and craftsmen ship into this perfect clubhouse. And do you know what is going to happen to it? They're gonna destroy it! That's what. They're gonna climb and bounce and throw and scratch and whether the dang thing until it's hardly standing anymore. And that's what we expect because they're kids. Destruction is what they do.

But my question through all of this is WHY?? Why do we put so much work, time, and money into things that we know good and well our children will destroy?

Is it for the few moments of sheer joy we see in their eyes when they discover their prize? Is it for the heart-melting joy we get from their precious giggles? Or is it the heart flutters we get when they say "I love you."?

Hours and dollars spent for just a brief ten seconds of happiness...that has got to be the very definition of parenting
at March 25, 2017 No comments:

Why I Let My Son Play in the Mud 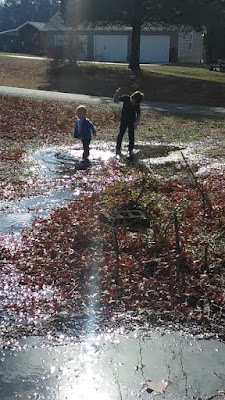 My one year old son absolutely ADORES mud puddles. We count down the hours until the latest rain shower has passed so we can put on our rain boots and head to the yard. He stomps and runs and splashes until he is just drenched from head to toe in yucky, brown water. Most parents don't agree with this idea because it's messy or it's too cold or some other reason. Now let's stop and think about each of these objections.
So rather than insisting your child miss out on all the joys and fun times of puddle jumping, just bundle their little toes up and have a towel and hot bath ready. Let them experience nature hands on rather than just as an observer. I can see such a huge difference in my little guy's level of gross motor skills since I stopped trying to shelter him from germs and just let him loose in the mud.

There are tons of ways you can enhance their creativity while outside as well. One of our favorite activities is making mud bricks. To do this all you need is:
Give your child the ice trays and a spoon and have them fill it with mud. Now the mud needs to be wet but not the liquid water wet. Just goopy enough to form in the trays. After they fill them up, allow the mud to harden just enough so that it will hold it's shape when you dump it out...usually between 30 minutes to an hour.

Once it drys dump the bricks out and let your little one experiment with the different creations they can build!

There's just so many ways that children can use mud to learn and develop essential skills for their later years!

More information about mud play:
http://www.natureplayqld.org.au/article/why-playing-in-the-mud-is-more-than-just-fun
at March 23, 2017 No comments:

My children do not know

My children have no clue of what is going on in the world around them.. They dont know the covid-19 adapted life we live.  They wake up and ...